On Sunday 27th May, War and Peace participated in the Giants’ Gathering in the town of Hazebrouck in northern France.  This involved a procession from the Town Hall to the Grand Place (main square), beginning at 4pm, and a dance with all the assembled Giants including the local ones, ‘Tisje Tasje’ and Toria, who were celebrating their 90th anniversary! 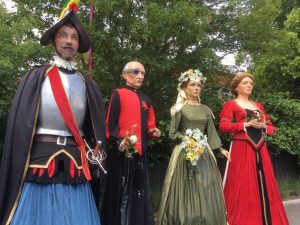 This is War and Peace lined up before the event with Monsieur & Madame de Tramasure, the Giants from Lessines in Belgium.  Altogether there were 31 Giants from 13 towns, and the spectacle was enjoyed by around 4,000 people, according to the local newspaper.

For the very latest news, you can also visit War and Peace’s Facebook page: